Proper orientation is one way to help with the retention of members. It provides an overview of the Lions organization’s proud history, structure, benefits, and extent of services worldwide. All new members should receive orientation of the International organization, District 50 Hawaii Lions, and their respective club. 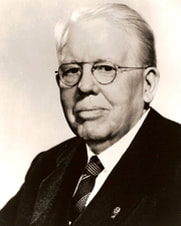 Starting as a dream in the mind of a young Chicago insurance agent, the man was Melvin Jones; the dream was the consolidation of several independent clubs, already in existence, into one strong, influential unit for service to humanity. This dream was presented to the leaders of various independent groups at a meeting in Chicago, Illinois, on June 7, 1917. From that meeting came a call for the Association’s annual convention, which was held October 8-10, 1917 in Dallas, Texas, with 23 clubs participating.  Thus was conceived and founded the world’s largest, most active and most representative service club organization.  (Melvin Jones – Founder International Association of Lions Clubs)

The Founding of Lions Clubs International

“…to aid my fellowman by giving my sympathy to those in distress, my aid to the weak and my substance to the needy” – Video Quote

The Association did not become international in fact until 1920 when the first Lions clubs were organized in Canada. The third, fourth and fifth Lions countries were China, Mexico and Cuba in 1926 and 1927. Eight years later Central America entered the fold, and in 1936 the first South American club was established in Colombia. The first Lions club in Europe was organized in Stockholm, Sweden on March 24, 1948. Although the largest by far, the Lions are the youngest of the major service club organizations. 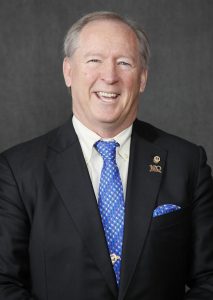 Today our Association is in practically all countries of the world. On every continent it is working through hundreds of thousands of Lions of all nationalities and creeds.

The Lions believe in club meetings where good fellowship and harmony prevail; in developing projects and activities geared to the needs of their communities; in broad participation in an international program of brotherhood and fellowship, based upon service wherever the need exists; in service to humanity without thought to race, creed, nationality, religion or politics; in the ultimate leadership of Lionism, but not at the expense of or in conflict with the programs of other organizations which, with different methods, seek the same goal of unselfish service to mankind. (Brian Sheehan, International President of Lions Clubs International 2022-2023) – “Together We Can”

The Impact of Melvin Jones

“Lions live to make this world better, not only for this generation but for the next.” – Melvin Jones

Knights of the Blind 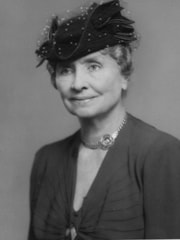 I pledge allegiance to my country and to the cause of peace throughout the World. I believe in the principles of Lionism as contained in the Lions Code of Ethics. I am proud to be a Lion dedicated to the service of others.

To develop an environment of fellowship, mutual trust, and understanding through which the Lions of District 50 Hawaii can advance the humanitarian purposes of Lions Clubs International and to develop leaders who will lead us toward the attainment of our goals.

How the Hawaii Lions Came to Be

The Incredible story of a 1926 fight for equality that changed the face of Volunteerism throughout the World – Forever! 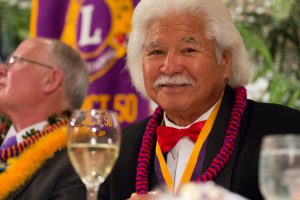 The Lions of District 50 Hawaii are a dedicated group of men and women that identify a number of critical community needs, then work together to raise the funds & manpower to fulfill those needs.  Celebrating our 95th year of service in the state, the 1,500+ Lions of District 50 Hawaii are members of 57 different local Lions Clubs throughout the islands.  Our Hawaii Lions relentlessly and unselfishly volunteer their talents, time, skills, and donations to assist and serve the people of Hawaii as well as assist & support charitable efforts throughout the world. 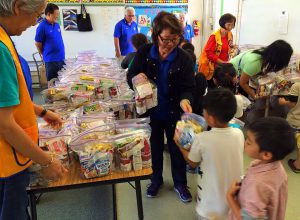 With nearly 1.4-million members in 46,000 clubs worldwide, Lions Clubs International is the world’s largest volunteer service organization.  Our members live the Lions’ motto everyday: “We Serve!”  Here are some historical facts about the Lions Clubs in Hawaii:

The Pan Pacific Club was chartered 10/11/26 as the Lions Club of Honolulu, opening Lionism worldwide to all races and nationalities after the “whites only” clause of the Lions International constitution was eliminated through the relentless lobbying of club Secretary, Colbert Kurokawa. 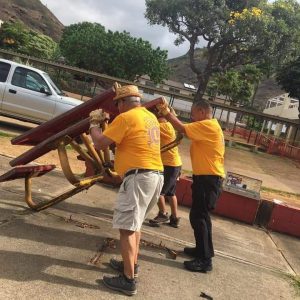 Helen Keller visits Honolulu in 1937 and personally urges the Hawai`i Lions to fully embrace the title of “Knights of the Blind” and to help “…make things right…” for the handicapped.

1938, Hawai`i Lions lobby the Territorial Legislature for $35,000 to assist the Bureau of Sight Conservation establish meaningful jobs for the blind by operating dozens of newspaper vending stands in several government buildings.  Hawai`i Lions would continue to raise millions more over the decades to help establish and support the Ho`opono Rehabilitation Center for the Blind.  The Hawaiian word “Ho`opono” means “…to make things right.” 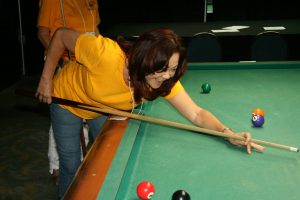 In the 20 years following WWII, over 40 new Hawai`i Lions clubs were chartered in District 50.

Kamehameha Lions Club (chartered 11/10/48) became the first Lions Club in the world chartered by Lions Clubs International to be named after a person instead of a location. 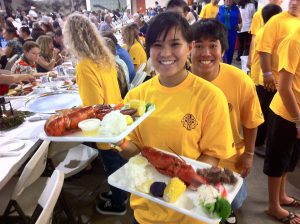 In 1949, Kamehameha Lion George Akau first coins the phrase “We Serve”, later adopted in a worldwide contest as the new motto of Lions Clubs International in 1954.  Hawai`i would lose official credit for Akau’s entry in the contest because it was postmarked one day late!

First snowball fight ever on Waikiki beach, March 28, 1952, held as a fundraiser by the Honolulu Lions and Waikiki Lions when they shipped in tons of snow via military transport from the Hawai`i summit of Mauna Kea.  Broadcast worldwide on radio, the stunt raised thousands of dollars for the blind as tourists & locals gave donations for throwing snowballs. 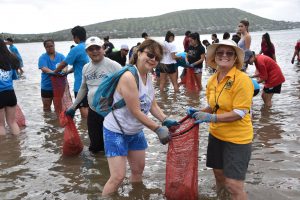 The 1976 International Lions Convention was held in Honolulu, drawing 35,000 delegates from all 50 States and over 125 Countries.  It coincided with the 4th of July holiday that celebrated America’s Bi-Centennial.  With the support and showmanship of Honolulu Mayor Frank Fasi, the Lions sponsored a massive & elaborate Waikiki celebration that still stands as the largest and most expensive parade in the history of Hawai`i.

Every Governor of the Territory and State of Hawai`i since the 1920’s has been an active or honorary member of a local Hawai`i Lions club. 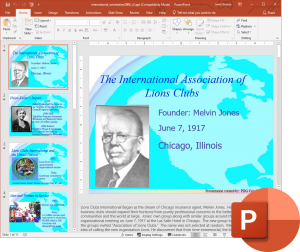 These PowerPoint presentations and interactive card games were created for usage in orientation and reinforcement. Please use these tools as instructional aid in telling the Lions story.  The  Complete Orientation File Pack includes the following Orientations:

TEST YOUR LION IQ!  Just for Fun, What’s your Lion’s IQ? Challenge yourself or have some fun at a meeting. How many questions can you answer correctly? The PowerPoint Lion IQ Test is also included in the Complete Orientation File Pack. 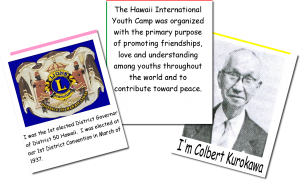 Prepare cards by printing the PDF Card Sets (in color) on heavy bond paper or card stock (preferred). Cut the sheet vertically in half and fold cards.

​To play the game: Randomly issue 1 card per player. Players are required to locate another player who holds a matching card. A matching pair is defined as having the same color AND border style frame. Upon reading the card’s information, the content described must be relevant to the pairing. Once this is established, all players need to work as a team, correctly placing their cards in chronological order. When done, the cards are read aloud. 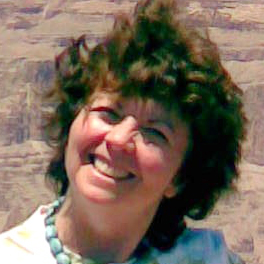 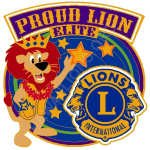 This member award program was designed as stepping blocks in progression to become a well-rounded Lion. As you grow within the organization, each task accomplished allows one to engage and to be active. The highest level award “Proud Lion Elite”, encourages the Lion to take on more leadership responsibilities. Let’s Get Started!

Each new member, with help from his/her sponsor or mentor, is asked to accomplish 7 tasks within 6 months of joining. The new member receives his/her award (a certificate of accomplishment and a pin) usually at the cabinet meeting following the fulfillment of the criterion.  The Proud Lion is also recognized during convention.

Go Out There and Make it Happen!

DONATE TO HAWAII LIONS FOUNDATION
Your charitable gift to the Hawaii Lions Foundation helps support our service programs. To mail in your tax deductible donation, simply send a check to: 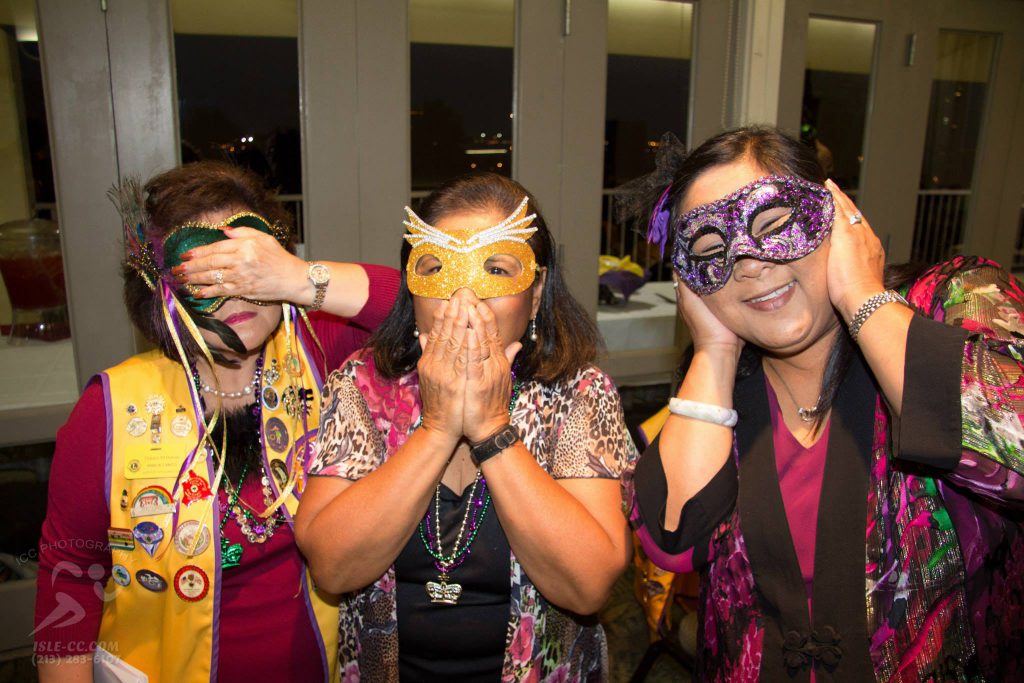